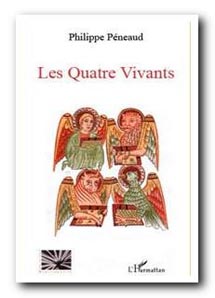 "This study examines in depth a topic rich and suggestive. It was conducted in a spirit and in a way that are dear to me because it seems suited for modern research in the field of Christian iconology. To the delight of the reader, this book, is written in a clear and precise theological language, far from any nebulae and falsely "mystical" formulations ... However, the book does not lack poetic passages, gently lit - even illuminated - by the faith of the author ... The author demonstrates the continuity of the theophanic meaning of the representation of the four living creatures and its omnipresence in all the different iconographic traditions of the Christian world ... "

The tetramorph on the tympanum in the church of Moissac

The Four Living creatures of Moissac

"Animated by a centrifugal movement, the Four Living creatures of Moissac are emerging from the mandorla as in the images of Christian Coptic art and Christian Greek art. Figured with the whole body, strong and powerful, they have nothing in common with the delicate Coptic silhouettes. Back arched, they deviate from the mandorla "like a whirlwind from the splendor of Christ" (Yves Christe, Les grands portails romans, Droz, Genève, 1969, p. 167)..." "...But as an elegant volute, the bust of the Four Living creatures is stretched back. In an extreme concentration, they are gazing to the Christ. From him, they hold life and they are waiting for any sign to spread it in its name, illustrating the words of Dionysius the Areopagite: "And every life and life-giving movement is from the Life which is above every life, and all source of all life. From It, even the souls have their indestructibility, and all living creatures, and plants in their most remote echo of life, have their power to live. And when It is "taken away," according to the Divine saying, all life fails, and to It even things that have failed, through their inability to participate in It..." when again returning, again become living creatures". Dionysius the Areopagite, Works, C. 6. The savage intensity transmitted by the work of sculptors - the stiff muscles, the deployment of the wings, the amplitude of the movements - emphasizes the fullness of life that inhabits them. The wings of the eagle, the fur of the lion, the robe of the ox, all these realistic details are increasing the strength of the image. The mouth forms a grin. Without being grotesque, it shows the absence of concession to sentimentalism and gives the scene the intensity of an ontological drama".
Page 255 of the book Les Quatre Vivants de Philippe Péneaud éd. L'Harmattan.

The tetramorph on the tympanum of Chartres Cathedral

The Four Living creatures of Chartres

"The flamboyance and liveliness of Moissac are sweeping in favor of a mixture of sweetness, of gravity and of hieratism. The majesty alone fills the entire surface of the Romanesque tympanum. The vision has softened. Perhaps we perceive the first signs of Gothic art. Christ is humanized ; he won smoothly that he loses in transcendence, while he retains a large hieratism. Two of the living creatures, the ox and the lion at the base of the mandorla, sketch a similar centrifugal movement towards the Christ, while their sight is trurning backwards. Nevertheless, the design and mobility of their wings are atrophied, if we compare them to Moissac. The eagle and the man have been reduced because of space. Directly turned to Christ, they do not sketch a shadow of a centrifugal movement. The tympanum of Chartres Cathedral with Christ in Majesty in a mandorla was copied and reinterpreted many times in northern France : in Le Mans, where the four living creatures are reproduced with perfect accuracy, Saint-Loup de Naud near Provins, Angers, Bourges".
Page 277 of the book Les Quatre Vivants de Philippe Péneaud éd. L'Harmattan.

The Four Living creatures of Angoulême

"Sculpted around 1120, the scene of the Ascension occupies the entire surface of the west facade of the cathedral of Angoulême. Standing in the hollow of the mandorla, Christ shows his wounds ... The mandorla of Christ is surrounded by the four living creatures. Winged powerfully, they are carved in a size almost equivalent to that of Christ. They turn their backs, but their eyes, by a backward movement of the head, which has the effect of unduly lengthen their necks, turn towards him. " The allusion to the visions of Ezekiel and John is unequivocal".
Page 247-249 of the book Les Quatre Vivants.

The Tetramorph in the church of Saint Sernin in Toulouse

"We move slightly from the Mediterranean in Languedoc, up to the basilica of St. Sernin of Toulouse to see Christ in Majesty the altar consecrated in 1096 by Pope Urban II". "Sculptured in a monolithic slab of marble white, the young and beardless Christ, blesses with his right hand and holds in his left hand an open book inscribed with the words "Pax vobis". The four living creatures are figured in the four corners of this rectangular representation which inaugurates the cycle of "Maiestas Domini" in Romanesque sculpture".
Page 239 of the book Les Quatre Vivants.

The Tetramorph in the church of Carennac 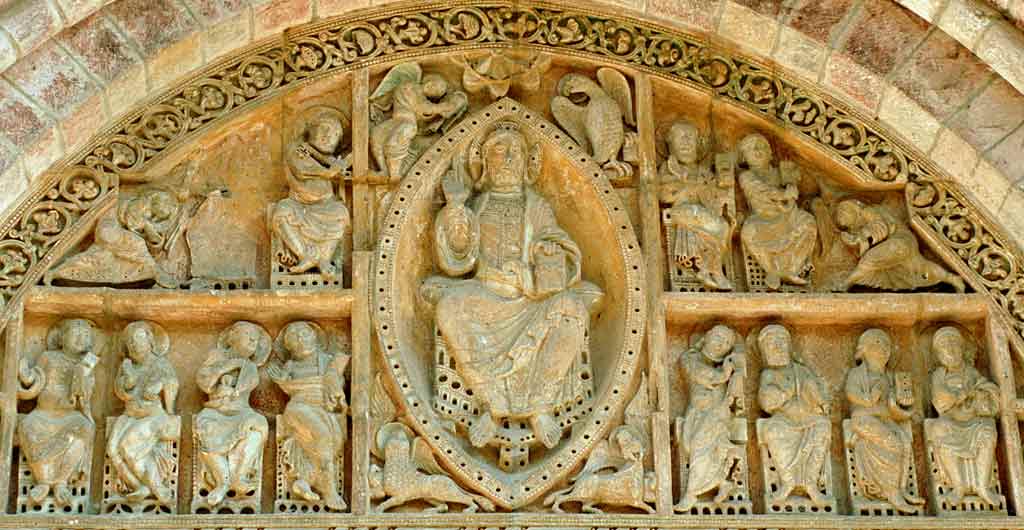